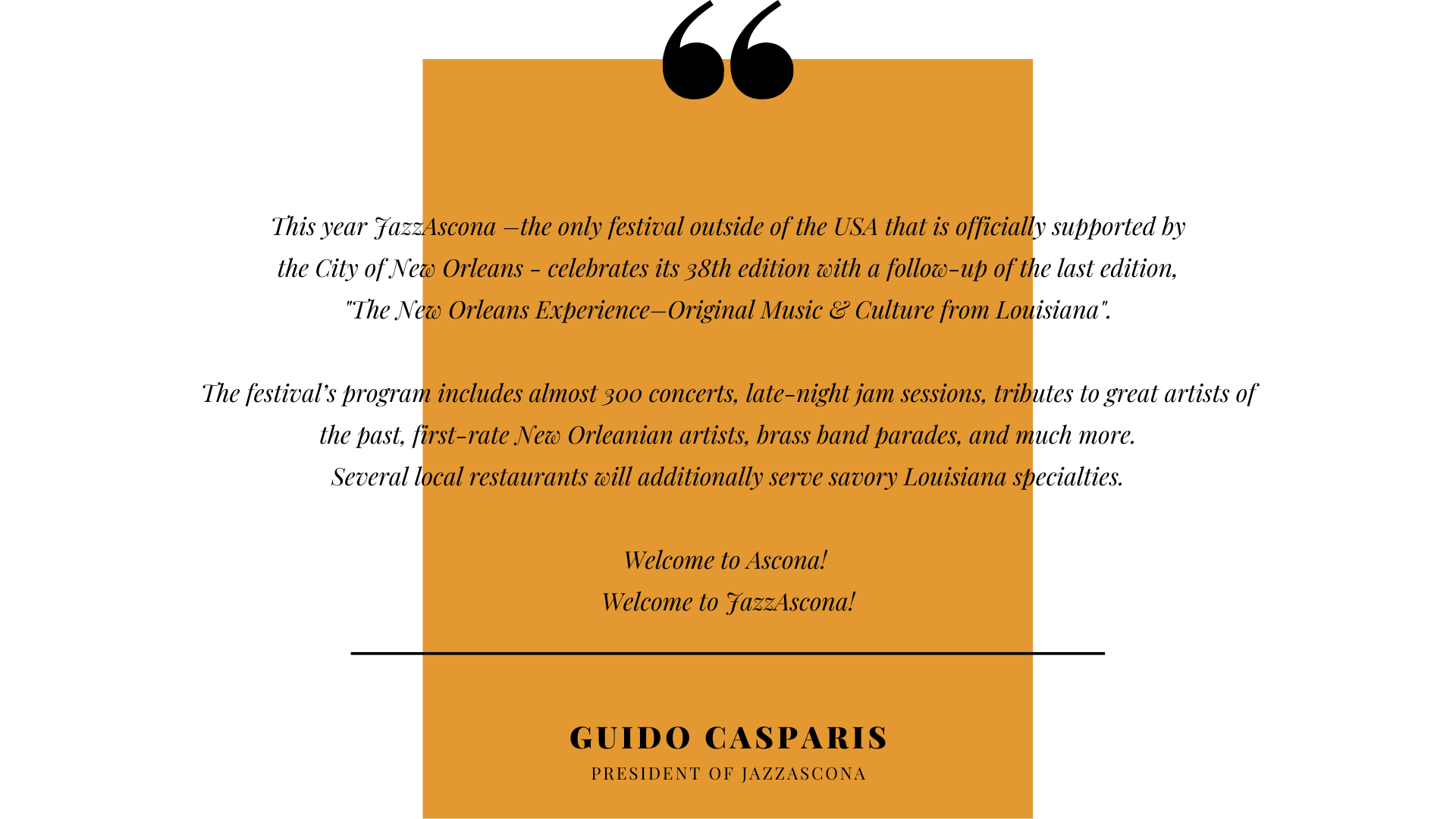 the City of New Orleans – celebrates its 38th edition with a follow-up of the last edition,

The two towns have had strong ties for decades, now they are happy to announce the signing of the official documents that will lead to a formal linking of the two municipalities.

This Friday night is the right night to pop into Ascona if you haven’t already done so and discover the new JazzAscona festival, which is achieving great success with its 350 totally free concerts and a formula involving the entire old town.

Even today, on the penultimate festival day, the bill of fare is proposed under the banner of the twinning between Ascona and New Orleans, which is declined with the participation of numerous «Sister Cities bands», formations created specifically for the festival that mix musicians from New Orleans, Switzerland and Europe. A good example of this type of lineup are the projects built around Ari Teitel, an extraordinary guitarist with the New Orleans Jazz Orchestra who we will see one last time tonight, starting at midnight.

Other highlights of the evening include bands such as the Four Deb, an Italian-Atlantic formation that offers impressive sound contaminations (7 p.m. Chiesa stage), the NOJO 7 (8 p.m. New Orleans stage), Ashlin Parker Trumpet Crew (very good, 11 p.m. Biblioteca stage) or Veronica Fusaro, a young Swiss soul singer who shines with her talent: she is a first-time guest of JazzAscona and will perform at 10:30 p.m. at the Seven Sea Lounge.

Groovin’ Up, young talents in the spotlight

More than one hundred bands from all over the world applied for the JazzAscona intiative «Groovin’ Up». A...

A basketball lesson with Westher Molteni and e Swiss Baketball 

Among the activities of JazzAscona there is a very special one, offered in collaboration with Swiss...

The Mayor of New Orleans in Ascona!

The last Major of New Orleans to pay a visit to Ascona was Sidney J. Barthelemy. That was in the early years...

Vote for your favorite band!

Once again this year, the JazzAscona audience can choose their favorite band by participating in a poll organized in cooperation with Azienda elettrica Ticinese.

The band that gets more votes will be invited to participate in the 2023 edition of the festival.
You can vote here: do it now!

As in the old days, starting in 2022, all festival concerts and workshops will be free!

This year, JazzAscona will be 100% free. No more gates, queues, counters nor tickets! The festival will furthermore go beyond the lakeside promenade, involving the entire town and spread the music and it’s atmosphere throughout the centre.