The band that brought Bluegrass Folk to millions of people: The Dead South

The Dead South, a Canadian band that makes a top-quality bluegrass and absolutely irresistible live gigs, will play at JazzAscona on Monday, June 27, 2022 in the first Swiss stop of their tour.
Multiple Juno Award winners, the band was formed in 2012. After several concerts, in 2013 they released their first EP, The Ocean Went Mad and We Were To Blame, which was followed by three albums: The Good Company (2014), Illusion & Doubt in (2016) and Sugar & Joy (2019).

Carried by Nate Hilts’ enthralling vocals, an instrumentation that includes guitar, mandolin, cello, and banjo, and a repertoire of well-known covers as well as their own compositions, the band has seen its popularity greatly increase since 2016, after the YouTube release of the video accompanying the song In Hell I’ll Be In Good Company, taken from their debut album, which alone has totaled nearly 300 million views. 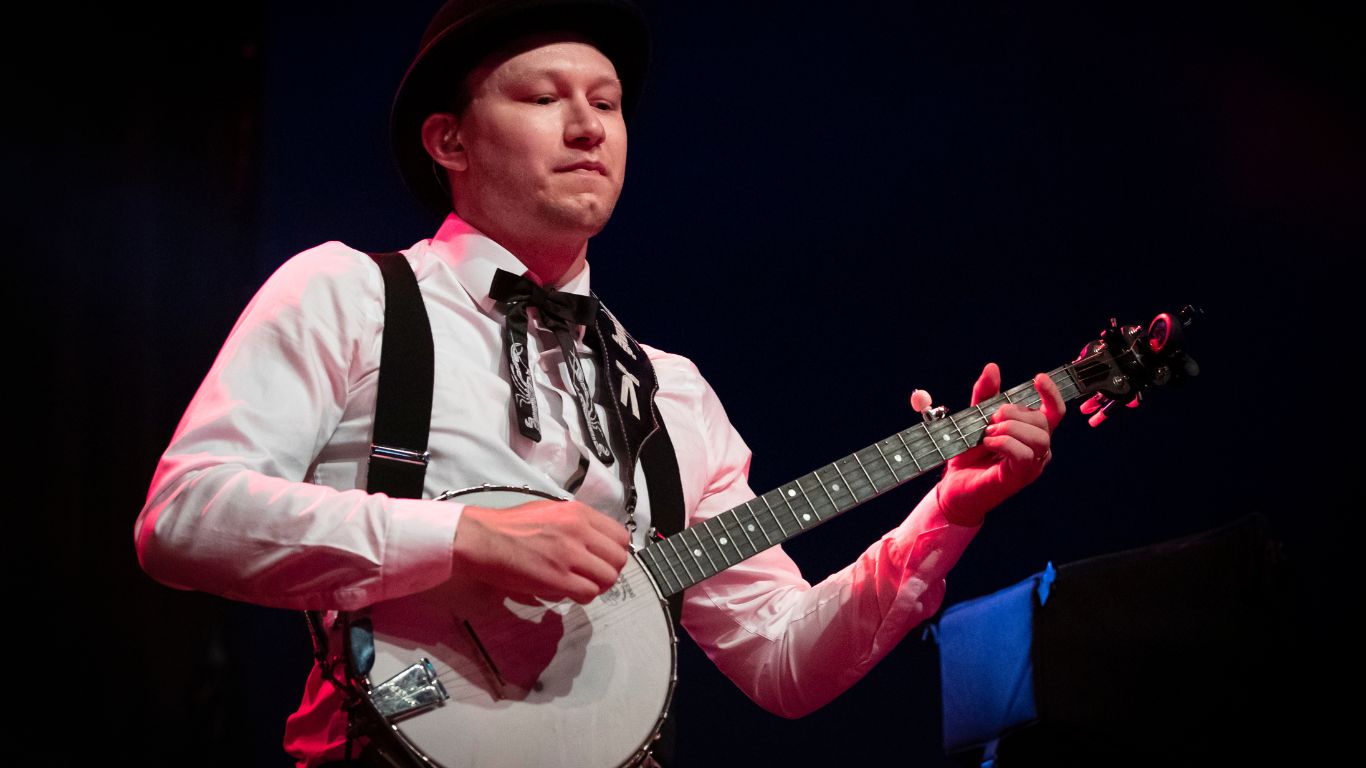 You are The Death South. Many associations come to mind. What inspired you, ten years ago, to take up this name? What topics are you bringing into your artistic discourse?

We get asked this question a lot. We used to have a drummer in the band and he came up with the name The Dead Souths, but we didn’t like how the plural «Souths» sounded, we dropped the «s». The name seemed to fit with the music and it stuck. We had our first local show booked opening up for some friends, and we didn’t have a name! So we just had to come up with something and that’s what it was, and it stuck.

What’s the essence of the bluegrass culture? What will you be bringing to Ascona?

We’re definitely not a traditional bluegrass band, so what we’ll be bringing to Ascona will be our version of bluegrass mixed with our punk, rock, and metal influences we listened to growing up. We’re a «bluegrass» band in instrumentation, but we feel more like a punk or rock band in terms of how we write songs and how we perform. We do love bluegrass music though, especially the storytelling element of it, and that comes across in our music as well.

Your sound is built on a configuration of cello, mandolin, banjo and guitar. How did that come about? How did these instruments come together to form The Death South we know today?

I had just started to learn the banjo, and Nate was just starting to sing and write songs on the acoustic guitar. Danny was a lifelong cello player, and Scott had never touched a mandolin before joining the band. Basically, these were the instruments we had lying around, so those are the ones we jammed with. We didn’t start out trying to create a bluegrass band or anything, we didn’t even think we’d ever record albums or play shows, we were just friends hanging out and jamming for fun. Similar to how we came up with our name, it just kind of worked, so we kept going with it, kept learning our instruments and figuring out how to make interesting songs with just those four instruments. 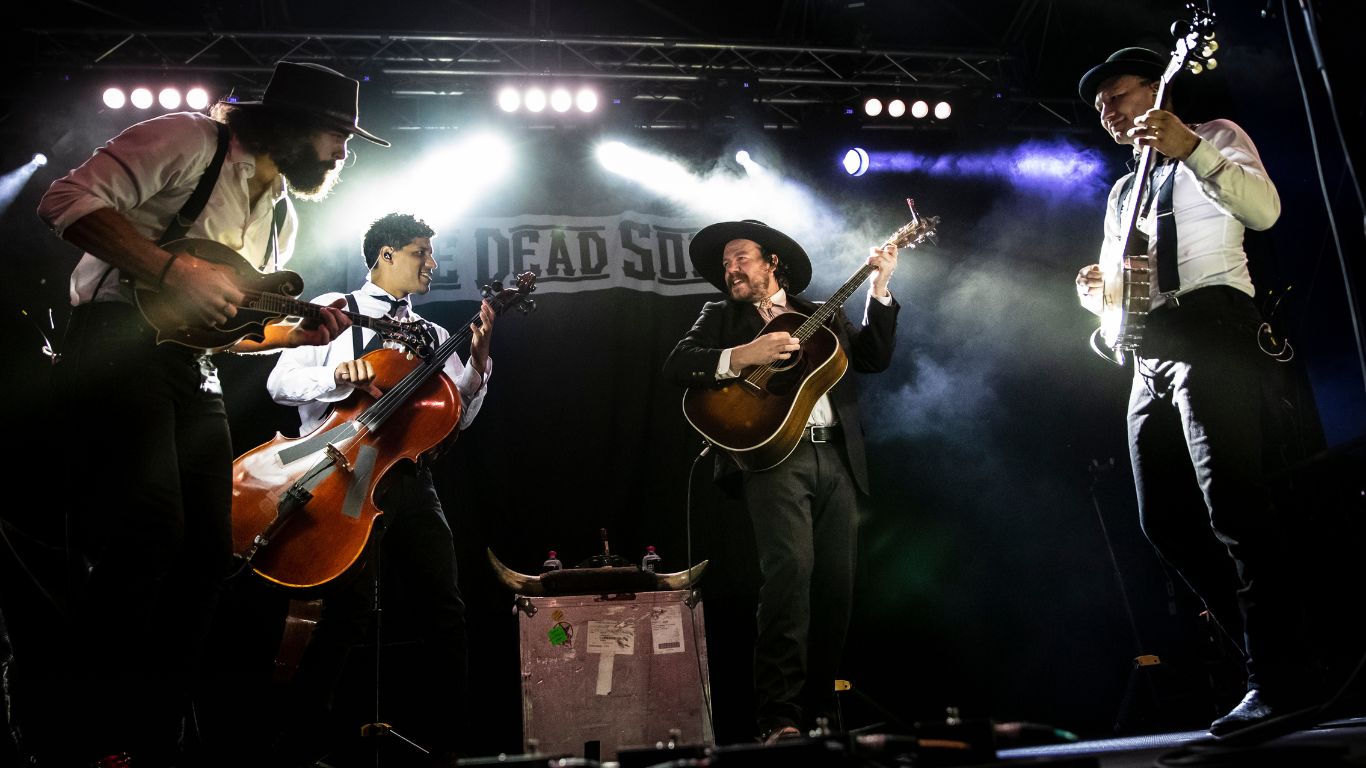 You come from Regina, in the Canadian region of Saskatchewan, and have been going a long way. How would you describe your hometown to your audience in Southern Switzerland?

It is very flat, wheat and canola fields forever. The joke in Saskatchewan is that you can see your dog run away for three days, and it’s true. The province’s motto is «Land of the Living Skies», because you can see all the way to the horizon and we get a lot of beautiful scenery in the sky. The city we come from, Regina, is a small city of about 300,000 or so, it’s a very quiet place. It’s very nice to go back there after being on tour all over the world, and slow things down a little bit.

This summer you are giving dozens of concerts in Europe and the States. You are booked until 2023. At the same time you have just released the double album Easy Listening for Jerks (2022). How do you balance the touring with the development of new songs?

This year has been mostly touring and not a lot of writing new material. We have a few months booked off at the beginning of 2023 to sit down and start writing again. Generally it’s pretty tough to write songs on tour, so we just focus on our live performances and playing the songs we already know. Then when we get time home from touring, we get together and sit down and write.

You have a strong fan base. Hundreds of millions of views of your music videos on YouTube. This must be energizing! What happened?

We got lucky when someone posted the music video for In Hell I’ll Be In Good Company on Reddit, and it blew up on there. That led to the millions of YouTube views and way more eyes on the band. That was our «big break» as it were. It’s pretty incredible that it happened, like I said we never expected any of this, so we’re just trying to ride the wave while we can and see how far it will take us.

What recommendation would you give to young musicians who want to find their place in the music industry?

Reps, reps, reps. Practice your songs over and over, perform your songs over and over. If you want to play live, play live as much as you possibly can. If you want to record, record as much as you possibly can. Just show up and do the work. Consistency over time is the biggest predictor of success, in my opinion. Don’t overthink it, just do it! And be patient! Another thing I would add is, try to find something that helps you stand out for the crowd. For us, we have the outfits and the silly dance moves. If you’ve seen the music video for In Hell, and you see a photo of us, you know who we are. Having something that makes you stick out is very important.